Distinguished local poet Gerard Rochford died late 2019. He will be much missed. Indeed, as a key member of the original team of volunteers who kept POTB alive when Aberdeenshire council discontinued publication in 2005, we are proud to acknowledge his contribution with this Appreciation by poet Judith Taylor. 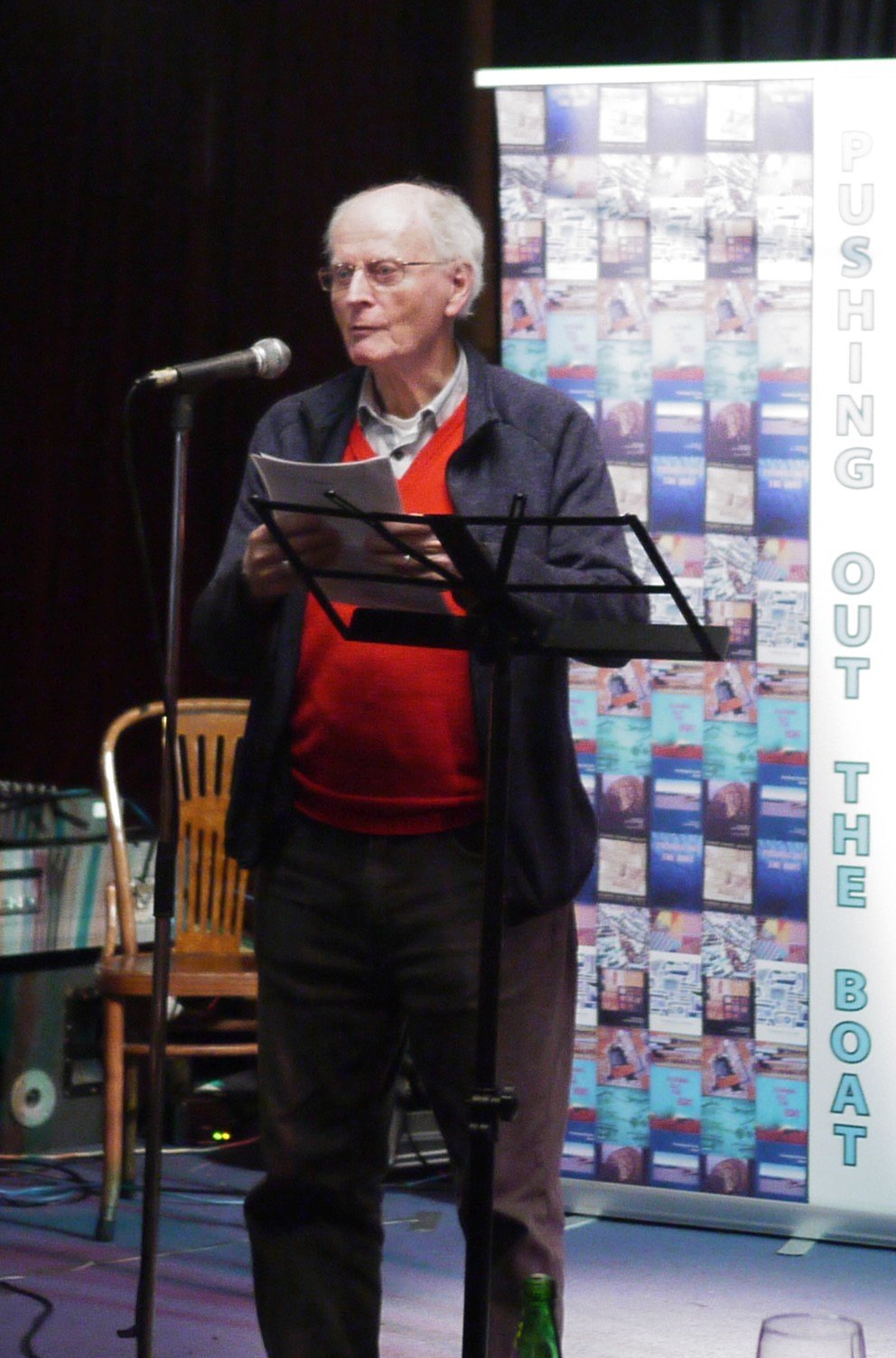 Gerard reading his work at a POTB Retrospective in the Blue Lamp in 2016.

It would be difficult – maybe impossible – to write a full appreciation of Gerard Rochford: life led him into so many spheres. He was an academic psychologist and a therapist; a beloved husband, partner and family man; a lover of music and the countryside; a man of deep thought and of wicked, deadpan humour. And he was not only a poet but someone who opened doors into poetry for many others, myself among them. This is the Gerard I want to speak of here.

I first met Gerard, as I first met so many poets, in Books and Beans on Belmont Street. In 2003 he, Doug Gray, and Eddie Gibbons began to look for a place to perform their work to the public. Books and Beans had newly opened and owner Craig Willox invited them to start a monthly poetry night there. And so Dead Good Poets (as it was then called) started, on the last Thursday of the month, with an invited guest or guests headlining and an Open Mic space for all who wished to get up and read.

Initially all three founders shared MC duties: but with Doug and Eddie working outside town the traffic was often a problem for them, and Gerard gradually assumed the mantle by himself. He was a courteous encourager of all comers – I was one of very many poets to take their first public steps in Aberdeen when I took a deep breath and put my name down for Open Mic – and the atmosphere of listening and support he fostered still endures, while his moving but unshowy readings of his own work set a standard to which we all aspired.

Encouraging poets into print was also part of the Dead Good Poets’ ambition. In 2004 they brought out a joint collection, Three Way Street, with Doug Gray’s Koo Press (which he had founded in 2002), and also became more involved in the running of the press, with Gerard editing or co-editing many of the collections, and Eddie contributing artwork and design. Koo Press gradually broadened out its operations, showcasing the work of new poets from the local scene and beyond: in its 10 year existence, it published some 38 chapbooks, many of them first collections, as well as anthologies and even collections of poetry and recipes. All of them were meticulously edited (Gerard’s motto “Delete, delete, delete!” still whispers in my ear when I come to revise my work) and beautifully produced. It’s a record to stand beside that of any small press in the country, and a roster I’m proud to have been part of.

While this was going on, Pushing Out the Boat sent up a flare. An important showcase for North-East writing and art, it had been published by Aberdeenshire Council since its foundation by then Writer-in-Residence Magi Gibson; but the Council was ceasing to support publication, and Magi’s successor, Mindy Grewar, wanted to ensure it continued. Gerard knew its value (he had a poem in the very first issue, as did Eddie and Doug) and was one of those who stepped forward, chairing the poetry selection panel for Issues 5 to 7 under the editorship of Martin Walsh, and contributing his painstaking skills to the copyediting process. As part of that early team he helped to set the high standards that the magazine has sought to maintain ever since.

Gerard’s own poetry very much reflects the man himself: meticulous and spare in its choice of words, but rich with feeling; curious, probing, and open-hearted; light in touch even with tough subjects; and always leaving the reader wanting more. He was a poet above all of the human heart – of love, of loss; of those he knew and those he wished to know better. His work of bringing poets forward into the world continues. And although we have lost Gerard the man, his voice remains with us in his poems, and his work will endure.

7 thoughts on “An Appreciation of Gerard Rochford”