Pushing Out the Boat receives contributions not just from all over Scotland, but from around the world, showing the high regard for our quality content. One such contributor is Perthshire-based, Heather F. Reid. We spoke with Heather to find out more about her journey to becoming a published writer.

What inspired you to become a writer? 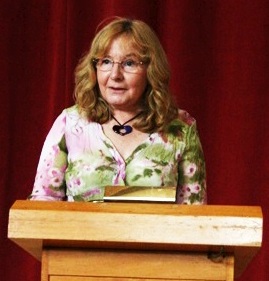 I’ve always enjoyed writing. I was actually first published in primary school when I was seven in the school magazine! It was a poem called ‘Red’ which I can still recite. My Mum was incredibly encouraging about my writing which helped too. I’m also an avid reader and the two, reading and writing, often go hand in hand.

On leaving university (I studied at Aberdeen), I moved with my young family to settle in Oban where I was a stay-at-home mum to my two children. At that point, my writing was a form of escapism – I spoke to adults on the page about things I couldn’t talk about during the day at home.

Which type of writing do you focus on?

I started writing poetry but switched to fiction. I’m quite a quiet person but I enjoy people-watching and making up stories about their lives in my head.

Much of my inspiration comes from things I’ve experienced first-hand and many of my stories are set in Oban or places I’ve holidayed. It’s incredibly therapeutic; it’s just finding the time and inspiration for it that’s the challenge!

Do you let others read your work before submitting to competitions and journals?

I’m a member of the Soutar Writers in Perthshire (and was also the group’s chair from 2010 – 2013), so usually I’d ask one of the group to read my work for feedback – it’s important to have another pair of eyes or set of ears!

I’d never let my close friends or family read my stories ahead of them being published. To me, writing is a very personal thing and I like the anonymity of it all.

When did you begin submitting work for the public domain?

I love that stories and poems can spark so much joy in others and I realised that my works could maybe do that too but that, whether or not they would, my poems were no use on my computer – so best to get them out there.

In 2004, I submitted a poem for an Ottakar’s book store competition of which, to much surprise, I was runner up! This boosted my confidence and I began to enter more competitions which also resulted in me being runner up in the National Galleries of Scotland competition in 2010 – the prize for that was a place on a course lead by Carol Ann Duffy.

How did you become aware of POTB?

A fellow Souter writer had been published in a previous edition and brought it to the group’s attention. I hadn’t had much of my work published at that time but loved the journal so thought I’d give it a try. Try I did, and four pieces of my work were selected (the first time that had ever happened, apparently!) – I was absolutely thrilled.

Having studied at the University of Aberdeen I feel such an affinity with the North East so it was even more special.

What does it mean to have your work featured in POTB’s pages?

The journal itself is a fantastic mix of art and writing and it’s lovely to feature alongside the other writers and in amongst their distinctive writing styles. Most importantly for me is the team involved with its production – each of them is so warm, welcoming and encouraging. It’s just wonderful to be part of It.

What do you hope to achieve with your writing in the future?

To finish the novel I’ve been writing for the past ten years!