Sheena Blackhall is a one of the most prolific writers in the North East – her writing collection is vast, and she’s appeared within several editions of POTB. Most recently she was revealed as one of the one hundred people to be paid tribute to at Aberdeen’s Hall of Heroes exhibition, which will highlight locals who have helped transform the world.

The POTB team spoke with Sheena to discuss all things writing (in Doric too!) and POTB.

How, and why did you begin writing? 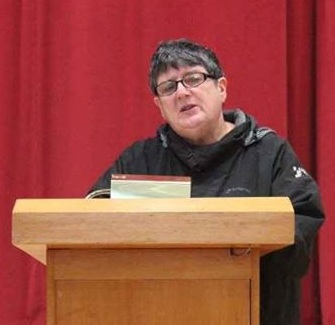 My love of writing goes back to primary school – apparently, the teachers thought my writing was great! It gave me such a sense of satisfaction… Until one teacher gave me a ‘clout about the lug’ for switching tense in the middle of a story, so I stopped, for a while…

This passion was reignited whilst I was studying for my teaching diploma – which I only did because I failed my first year at Gray’s School of Art and could just get the funding for a three-year course! The diploma was three years, so that was that. During this time, I wrote children’s stories for BBC Radio Scotland – and I’ve never looked back!

You write many of your stories in Doric, why is that?

It was my first language, and the one everybody spoke. My Dad could only speak Doric, my Mum could speak English due to her work as a secretary during the war and my Grandmother spoke nothing but late 1880s Doric. I had little choice really, they wouldn’t understand my English!

As it’s my mother tongue, I always feel that when I write in Doric its straight from the heart.

Why did you submit stories to Pushing Out the Boat (POTB)?

I saw POTB at various venues and was drawn to it because of the artwork on the front pages – it was refreshing to see artwork featured alongside quality literature and I like the ‘blind judging’ process and concept – so I began to submit a mixture of short stories and poems.

I see POTB as a boost to the Doric language and the culture and heritage of the North East. People like and respect the journal. As it’s a ‘real’ book, it verifies Doric as a language – there’s very few outlets which keep Doric alive.

What work are you most proud of?

Apardion, A Leopard’s Quest! which was published by The Reading Bus and tells the story of a leopard spirit from the Northern Lights. In his quest to discover if Aberdeen should be his place of birth, he visits 14 heritage landmarks and discovers secrets from the past.

You’re incredibly passionate about the power of the written word, why is this?

Writing keeps me sane! It’s such a strong way to express yourself. I actually also hold writing therapy classes where participants can externalise thoughts, and deal with their emotions, their grief and the issues they carry.

Would you encourage young writers to submit work for literary publications, such as POTB?

Absolutely, putting pen to paper about anything is something I encourage in children of all ages – to have the ability to convey a story through a poem, or a short piece of work is such a skill.

POTB in particular is very supportive of young writers; a number of teenagers have featured within its editions, so if you submit quality work – regardless of age you’re in with a chance of being accepted.

To see your work published is such a fantastic thing. That said, it doesn’t always happen on the first, second or even eighth attempt, but when, and if, it does, it’s wonderful to know that people are reading, and enjoying your work.

1 thought on “An interview with Sheena Blackhall”