The following is a Q&A with incoming Editor Lily Greenall by retiring Editor Martin Walsh.

Note from the POTB team: we are delighted that Lily has joined us, and we wish her every success in her new role. 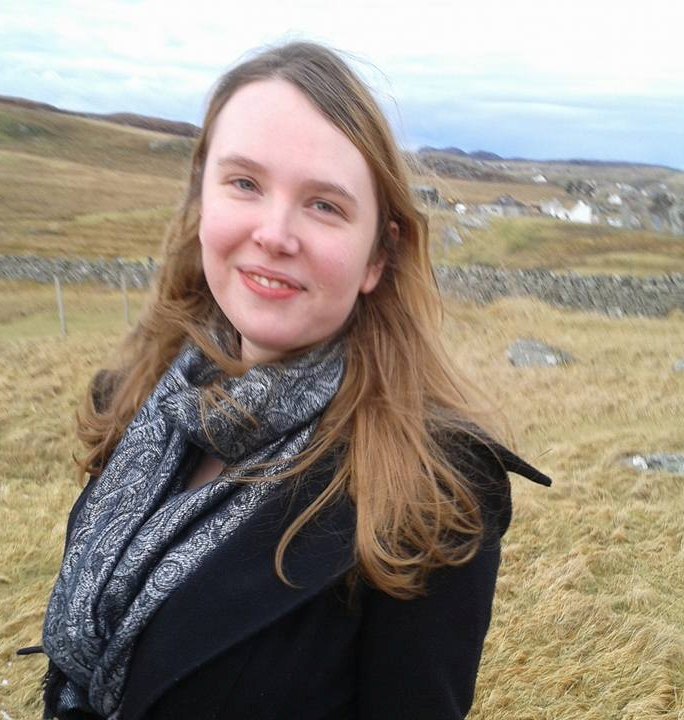 I know I speak for everyone in the team when I say how pleased and honoured we are to welcome you aboard. Could you tell us when and how you first heard of POTB and what were your initial impressions?

I first heard about POTB from my PhD supervisor, Wayne Price. He recommended it as a good place to submit some of my work and, following his advice, I sent in my short story ‘Frank,’ which was accepted. I came to a POTB event at the Aberdeen University May Festival and was really impressed by the quality of the work read out and the friendly atmosphere among the team; this encouraged me to apply when I heard that the Editor’s position was available.

I believe that, like me, there is a little bit of Kent in you? If so what brought you to Aberdeen?

Yes, my mum’s side of the family are from Kent – I’m going on holiday there in March to visit them. I grew up on the Isle of Lewis though. We used to visit friends in Stonehaven a lot and come to Aberdeen to do our Christmas shopping, so I have nice childhood memories of the place. I came to live in Aberdeen ten years ago to start my Undergraduate Degree. After this I stayed on to do an MLitt at the uni and this led into doing my PhD here. I’ve always liked living in Aberdeen – I’ve lived in flats all over the city now! I think it’s a nice size of town for someone from a small place and I like being near the sea.

You are amazingly well qualified for this job, with your experience of editing Causeway, your PhD in Creative Writing and your own story-writing skills. Does it concern you that in generously taking on this (voluntary) job you will be reducing the number of hours you can devote to writing and/or earning a wage?

Thank you! I think it’s going to be a challenge at times, but I’m not overly concerned. I got used to doing Causeway – where the responsibilities for every stage of production were often shared between just two of us – alongside my PhD and the other responsibilities I had while I was studying, so I’m used to juggling my time. I’m also currently working as a freelance writer and, although I have lots of deadlines to meet, my schedule is very flexible because I can set my own hours. Hopefully I’ll be able to keep doing this and POTB will fit in well. In terms of my own writing, I think its always inspiring to read good fiction submissions and it keeps you motivated to write. Overall, I see POTB as a great opportunity to broaden my skillset in a way that I think will be very helpful to my future career, no matter what I end up doing.

What/who was the subject of your PhD?

I did my PhD on the figure of the Devil in Scottish fiction and folklore. Originally I planned to do it on folk tales from the Isle of Lewis but, as I discovered, there aren’t a huge amount of written tales about the Devil from there (although there is a very lively oral tradition), so I broadened my topic out and it ended up being a lot to do with Borders folktales and with Walter Scott and James Hogg.

Alongside this I wrote a collection of short stories that featured different takes on ideas about the Devil and the supernatural in Scotland. I was quite open-minded writing the stories so not all of them ended up featuring a Devil character, or even really fitting this theme. I think it was a cohesive enough collection overall, though, and it was great experience writing it.

When did you first develop a love of literature, which writers have most influenced you and do you have a favourite genre?

I always wrote stories and loved reading, but I didn’t really take it seriously until I was finishing school and deciding whether I wanted to go to university or not. What really made up my mind was, when I was about sixteen, I got really into a series of books called The Vampire Chronicles by Anne Rice, which are these very Gothic historical novels set in the 1700s in New Orleans. I loved reading them so much that it set me off reading all sorts of other things and I started seriously working on my own fiction. I decided to study English at university and, once I started, I just wanted to keep doing it. Even one of the freelance jobs I’ve got just now is writing literature study guides.

I feel like I’m influenced by whoever I’m reading at the time, but I definitely have writers who always make me want to write and whose style really resonates with me. I really like Angela Carter and Shirley Jackson. At the moment I’m reading a lot of Doris Lessing. I love the way she writes, it’s very precise and observational – she makes you feel that there’s loads going on under the surface even when, seemingly, not much is happening.

My favourite genre is definitely Gothic fiction, even when it’s a bit silly and melodramatic. I just think it’s so fun. I love classic Gothic novels, like The Hunchback of Notre Dame and Wuthering Heights, but I like a bit of modern horror as well. Stephen King is good – his novels are very vivid. James Hogg’s Confessions of a Justified Sinner is probably my favourite Gothic novel.

You had a story, ‘Frank’, in the last edition of POTB. The writing was spare and so beautifully observed. How on earth do you manage to get inside peoples’ heads, both sexes, so convincingly?

Thank you very much! I actually really like writing from the perspective of a man, although I haven’t been doing it so much recently. I used to write almost exclusively from the point of view of men. Partly, I think its fun just to imagine an experience which isn’t your own. I think men and women sometimes have a very different social experience and it can be fun to play at being someone who can do certain things that you wouldn’t do, or to imagine being someone that people would react very differently to or expect different things from.

I think a lot of it comes from the writers I’m reading as well. I think, just by accident, I used to read more male writers (or women writers who wrote from the perspective of men) and, recently, I’ve been reading more female writers so maybe that makes a difference in how I write.

For the moment I’d like to focus on keeping the quality of the submissions accepted at the same high level and, given my own connection with the university, perhaps build some more links there. I think it would be great to see more submissions from young writers or student writers as they’re often looking for places to send their work and get their first publication. It would be great to emphasize that POTB is a friendly place where young writers can send their work.

And finally, tell us something surprising about yourself, literary or otherwise?

I quite often listen to terrible electronic club music when I write. Something about the rhythm of it gets me energized to keep writing. The only problem I find is that, because I’m listening to this, I always end up writing scenes set in nightclubs. It wasn’t so bad when I used to go to nightclubs a lot, because I’d write about things I saw there or things that happened on nights out, but now I hardly ever go to nightclubs so it doesn’t really work as well.

Many thanks Lily: so good to learn a little more about you. I’m sure our readers will feel the same.