Published by Pushing Out the Boat, 2017

Issue 14 of Pushing Out the Boat, North-East Scotland’s Magazine of New Writing, was launched on Sunday 30th April 2017 at the Phoenix Hall, Newton Dee, Aberdeen. 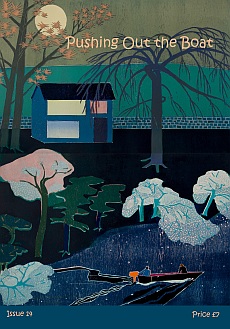 Pushing Out the Boat is so much more than just another literary magazine: well into its second decade now (far outlasting the average lifespan of the species) its 14 issues comprise an extraordinary and beautifully produced treasure house of new writing and art. Part of its unique value is that it provides North-East Scotland with a journal to be proud of, one that any other region would envy, acting as a vital inspiration for emerging (and of course established) writers and artists making their own contributions to a line of local brilliance. Another, equally vital, aspect of its quality is its complete and refreshing lack of parochialism. From its earliest days, the magazine has been welcoming to an extraordinary breadth of artistic approaches and inspirations: visual as much as literary, rural as much as urban, experimental as much as traditional, regional as much as international. All tones of voice can be found here, and all shades of vision; the one common denominator is quality.

It’s very fitting that this year’s cover art has been donated by no less an artist than 2016 V&A Prize winner (and ex-Artist in Residence at Peacock Visual Arts) Tom Hammick. I can’t think of a better word than lyrical to describe the haunting blend of narrative and dreamlike imagery in his luminous print. A beautiful vision of lovers ‘pushing out the boat’, it’s also a work, as the artist himself explains below, that draws its inspirations from the operas of Europe and the art of Edo-period Japan. Like the magazine itself, then, it reminds us that the best art is beyond simple borders and boundaries, always teasing our imaginations to cross over from one form of expression, one way of telling, one way of seeing, to another. What could be more appropriate as a gateway to Issue 14?

In an age of increasing intolerance and even contempt for diversity and open-heartedness, Pushing Out the Boat, like Hammick’s print, is a reminder of the power and special value of creative expression itself, free of snobbery, prejudice and narrowness of any kind. It’s a remarkable tribute to each contributor, emerging or well known, working in whatever mode or form, united by a love of craft and creative expression; and a tribute to the volunteers who, in its production and marketing, make the whole thing possible for the people of North-East Scotland and far beyond, year after year, triumphantly.

Dr Wayne Price is the author of the short story collection Furnace, the novel Mercy Seat (both published by Freight Books) and the Laureate’s Choice poetry pamphlet Fossil Record (smith|doorstop). He has lived and worked in Aberdeen since 2002 where he teaches English and Creative Writing at the University of Aberdeen.

The artist Tom Hammick’s inspiration for the cover image: ‘Violetta and Alfredo’s Escape’ was inspired by a residency I had as Artist in residence at ENO. This woodcut came from listening and watching their production of Traviata many times. I wanted to give Violetta a break, and somehow enable her and Alfredo to at least attempt to escape from the cruelty and stringent morals of the bourgeois society that separated them. Here they are in suburban bliss, somewhere I imagine upstream on the Thames! (Rather than in the Parisian outskirts.) Their domestic sojourn happens in my picture in a post war detached span house, cosy, small, simple. The garden is a take on a print by my hero Hiroshige, but the passing of time is indicated by some trees in blossom, some in full leaf and others as skeletal winter shapes.’

Tom Hammick is an artist based in East Sussex and London. ‘Moved by the minutiae in life, he reflects on man’s place in the world, his seductive landscapes metaphors for the human condition… the work sharing sensibilities with contemporary narrative forms.’

‘Four Ways of Looking at a Crossroads’
poem by Clive Donovan

‘Muse and Rapture’
extract from story by Vivien Jones

‘The Candlelight Patrol’
extract from story by Peter Sheal

The stories by can be read in full in Issue 14

(Click to view a slideshow of the POTB 14 art)