Published by Pushing Out the Boat, 2019

Issue 15 of Pushing Out the Boat, North-East Scotland’s Magazine of New Writing, was launched on Sunday 7th April 2019 at the Phoenix Hall, Newton Dee, Aberdeen. 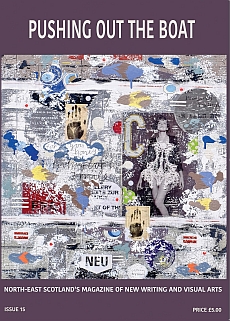 This fine collection prompted my return to a book of Scottish ballads: it opened at The Baron of Blackley, which I remember hearing as a student in Aberdeen.  So I read Issue 15’s poems first, wishing I could discuss each one. It’s as if their remit were to probe, in Scotland’s many voices, whether the ballad still has its place. The Doric voice sketches the route in Norse saga; Shetlandic Scots tells, by hints, a contemporary story.  Maybe one size doesn’t fit all, but it seems that story is an essential part of each of these diverse, but consistently well-made, poems.

Sometimes myth has been filtered through the medium of a Stanley Spencer painting; sometimes verse paints – ‘a line of Harleys sweeping through a glen’.  Arresting images like the rope-swing and the set of improvised scales. The balladeer tradition has a future when a 16-year-old poet has the panache to write: ‘She might have shoved the fruit of knowledge so far down his throat that he choked’. When Scots is used, it has the spark of the true vernacular. A tidal bell rings for the late lives of herring-gutters, seamstresses and observers of the first Cosmonaut; there are hints of the known mythology of the rowan and the mysteries of the premonitions of the butcher’s wife.

I grew up on spoken stories, later discovering a fascination with the written form. Grassic Gibbon and Mackay Brown consolidated this.  Complemented by stimulating artwork, the stories in this collection offer more than a showcase. Sometimes it is in an imagined memoire; sometimes the detached author lets the characters just do and say what the hell they like. Use of imagery is often also ballad-like, as when the digital jewels of a game appear in a pair of eye sockets. The Doric voice ranges from the comic to the brutal. A bonny wee lass bluntly tells of deprivation; the revelation builds to a classic sting in the tail. A Scots tongue and a strained attempt to speak in ‘standard’ are placed in mischievous juxtaposition; a football pitch is a dangerous place if you stand out from the crowd and your own voice, hard edged, is just about all you’ve got.  Many voices, indeed – from the sectarian lingo of abandoned steelworks to the underlying Gaelic syntax heard on a Hebridean ferry.

Strange events are well-sketched in that more ‘standard’ English. The moon that might have brought a turtle from Mexican waters to west Britain is glimpsed above the skyscapes of named streets; the storyteller can also imagine the landscape of a Western and the splash of colour in its settlers’ clothing.  The tender moment, the small burst of lust or sudden violence can all occur without warning. But, wherever the setting, it is the particular, scrupulously outlined, which arrests the reader: ‘It only looks like the same place… the river’s always changing.’

Ian Stephen began to perform and publish his poems and stories as a student at Aberdeen University.  His novel A Book of Death and Fish and his most recent new and selected poems: maritime are published by Saraband. Waypoints (Bloomsbury) was shortlisted for the Saltire Scottish Non-Fiction Book of the Year, 2017. Thanks to a Creative Scotland award, he is completing A Book of Plenty Voices, his second novel.

‘The iceberg that sunk the Titanic’
poem by Sheila Templeton

‘A Hallach Quine’
extract from story by Brenda Crane

The stories by can be read in full in Issue 15

(Click to view a slideshow of the POTB 15 art)