March saw a major change to the crew and complement of the Boat with the retirement of Martin Walsh and Freda Hasler, who have been core members of the Pushing Out The Boat team since Issue 5. Between them, they have filled just about every one of the vital roles that keep the Boat sailing on. 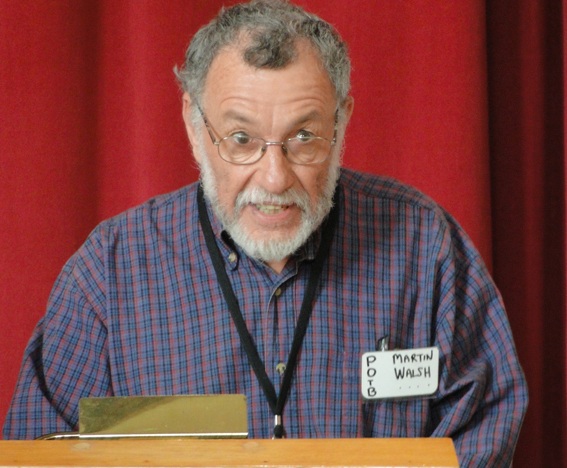 They first came aboard (sorry, but Awful Nautical Puns are one of the traditions they established, and that we have a responsibility to continue) for Issue 5 of the magazine. POTB was founded and first edited by Magi Gibson, who at that time (2000) was Writer in Residence with Aberdeenshire Council. She was later succeeded in both roles by Mindy Grewar. However, in 2005 the Council found it necessary to end direct support for the magazine and Mindy, anxious to see it continue, put out a call for volunteers to take over its running. 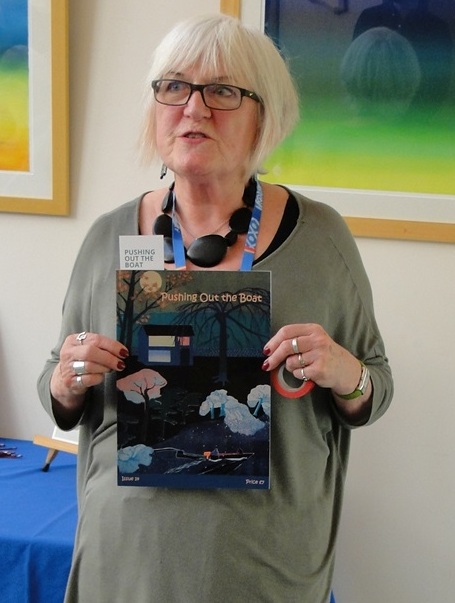 Martin and Freda were among the first to step forward, and the work they have put in during the 15 years and 10 issues since has been pivotal to the magazine’s continued success. Martin was very much the public face of the magazine for much of this period, serving two spells as Managing Editor, as well as helming launches and fundraisers, and filling vital roles in Sales and Outreach. Freda meanwhile took a leading role on the production side as Coordinator, steering the internal and external communications, the teams handling layout, copyediting and proofing, and the multifarious organisational and administrative questions that arise in putting together a magazine.

The finished magazine is of course… well, it would be a pun too far to say “the tip of the iceberg”, but perhaps we can say it’s the grand entertainment on deck, band playing, whistles tooting, and flags fluttering, that can’t go ahead without huge efforts of organisation, expertise, and engine-power below decks. Submissions have to be attracted, then received, anonymised and distributed to panels evaluating prose, poetry and art submissions. The panels sift the daunting catch of hopeful works and make their selections, and then the work of layout and copyediting begins. Meanwhile, discussions will have been under way with a printer, deadlines set or revised, acceptances and rejections sent out, and editorial queries made, and the answers relayed. And, after the whole lot is finally ready and sent off to the printer, the arrangements for the launch need to be finalised. Post-launch there are only the small matters of publicity and sales, fundraising applications and events, annual reports…. before planning starts for the next issue.

There must have been times when both Martin and Freda pondered actually running away to sea for an easier life: but they have stuck with the Boat through 11 issues, literally thousands of submissions, uncertain financial times, a shift of gear to full charitable status, and an expanding profile both locally and internationally. Their contribution to its current standing is immeasurable. To be entering its 21st year is an enviable record for any literary/arts magazine; to have published the work of writers and artists both new and experienced, to have maintained a strong local presence while showcasing work from , and to have held to such high standards of quality throughout, is an achievement everyone involved can be proud of, and Martin and Freda most of all of us.

We will miss them both as we pipe them ashore (though we won’t be surprised if we see some contributions from them, now they have more time for their own creativity), but we wish them happiness in their hard-earned retirement, and above all, calm sea and prosperous voyage.

Footnote. The Pushing Out The Boat team intend to hold a celebratory event of readings for Martin and Freda by magazine contributors and friends once we are past corona lockdown restrictions. Watch this space.
well, we don’t think we’ve had anyone from Antarctica yet, but we could be wrong

2 thoughts on “Martin Walsh and Freda Hasler – a tribute”