Published by Pushing Out the Boat, 2007

Issue 6 of Pushing Out the Boat, North-East Scotland’s own prestigious magazine of new writing and visual art was launched on 1 May 2007. The event at Woodend Barn, which began the Wordfringe 2007 festival, featured readings by many of the contributors along with displays of artwork. 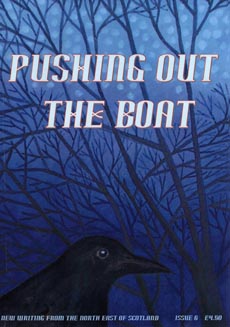 How often do you get the chance to read exciting new writing in a beautiful format? With striking artwork, Pushing Out the Boat offers you insight into some of the best of what is being written NOW in Scotland’s North-East. A poem can change your perception of a windfarm — skirts of a ballerina; two women looking at a dig in St Nicholas are really poets on the job. Stories range from Yemen to California; from an encounter with a snake in Africa to discussion of Neighbours from Hell in a wonderful Buchan pub. Open up to the riches of our writers.

Isobel Murray is Honorary Professor in Modern Scottish Literature at the University of Aberdeen and editor of the highly popular Scottish Writers Talking series.

The story can be read in full in Issue 6