Q. Where can you find poets from California, North-East Scotland, Bulgaria, the Yukon, Edinburgh, South Yorkshire, Texas, Mull, London, Shetland and Shropshire all in one room in Aberdeen?

A. Upstairs at Books and Beans in Belmont Street, Aberdeen. 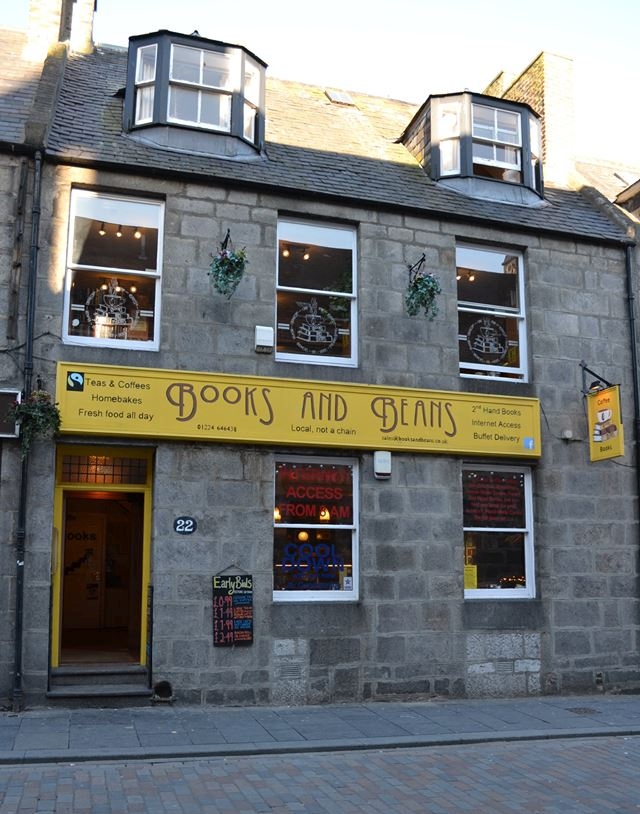 Well, OK, the answer’s a bit of a cheat. It’s not so much ‘can’ as ‘could’ since they were assembled at Pushing Out the Boat’s latest evening of readings, on Thursday 26 April. And, no, the magazine hadn’t paid expenses for a stellar international cast to assemble for just one day. But they were all there in the way that’s most important for poets – through their words. More remarkably (to this first-timer) all their poems, with a leavening from one or two earlier editions, came from the latest edition, No 14, available, as they say, at all good retail outlets and online.

If you can’t get all your poets along to read their work, you corral the ones you can to do the deed. Which is why those present heard a team of seven excellent readers, all published in POTB, perform not only their own poems but those of other absent contributors too. Being eased into the secrets of magazine production and arts events (your author is a new team member helping POTB with its PR) gave privileged access to organiser Martin Walsh’s programming skills and how to get a good mix, not only of poetry, but of readers too. Authors might be surprised to find their finely crafted work reduced to a single word in the program eg … landscape, dark, realist, humour, poignant …’, but their juxtaposition is a necessary discipline to keep an audience engaged and make an event flow.

And flow it did, from Tobi Alfier’s opening Planting Level (an echo for me of Steinbeck’s Grapes of Wrath with her ‘honor your wife with Rose of Sharon …’) to Martin’s closing New York Dialogue (no, I haven’t witnessed a squirrel and a humming bird having a blether about nuts in Central Park either). Having picked out the two works that book-ended the evening it’s disingenuous to invoke the old cliché about how invidious it would be to highlight individual contributions, but that’s what I’m doing. By way of compensation, the full programme follows this brief article. You know where to find the poems if you want to read any for the first time or perhaps refresh your memory of old friends.

A final surprise for me: this being Books and Beans, two halves of readings were divided by their usual open mic session: nothing to do with the magazine of course – except up popped Olivia McMahon to read a poem, My Uncle Sonny’s Jacket, from the very first edition of Pushing Out the Boat, published at the turn of the century. That in turn led me to discover later that Aberdeen poet Eddie Gibbons (not read on this occasion sadly) had work in both the first and most recent editions of the magazine, a unique distinction.

Oh, and that first Pushing Out the Boat was sub-titled ‘New Writing from the Northeast’. How far it’s spread its wings in fourteen editions.

With thanks to the evening’s team of readers, all naturally with work in editions of POTB:

And, of course, to the wonderful Books and Beans for hosting the evening.