North-East Scotland’s literary magazine and Scottish charity, Pushing Out the Boat, has been gifted the use of a prize-winning image for the front cover of its 14th edition, which will be launched on 30th April.

Internationally acclaimed and 2016 V&A winner Tom Hammick has donated the use of his print, ‘Violetta and Alfredo’s Escape’, which was inspired by his time as artist in residence at English National Opera (ENO). 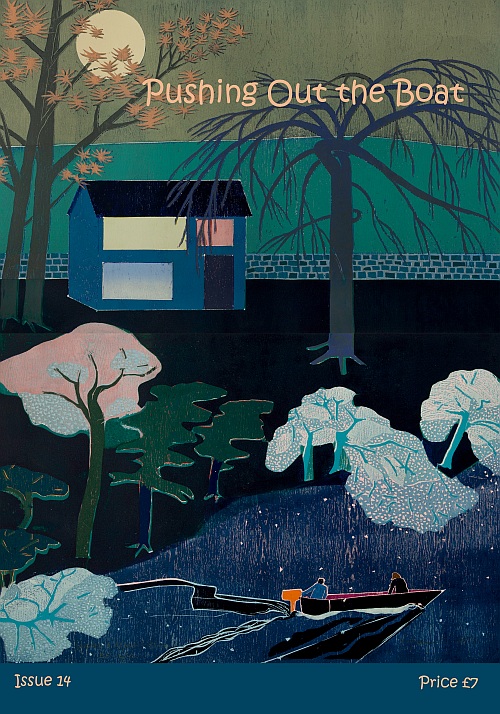 Tom Hammick is a British artist based in East Sussex; in 2016, he completed an Artist Residency at Peacock Visual Arts, Aberdeen, where he is currently printing new editions. A senior lecturer in Fine Art, Painting and Printmaking at the University of Brighton, Visiting Lecturer Fine Art at University of Ulster, and at NSCAD University, his work can be found amongst many of the world’s major public and corporate collections.

Pushing Out the Boat is a journal of new writing and visual art, run by volunteers, and features work from both established and first-time published writers, local and international.  Recognising the importance of the many forms of Scots language to local culture and heritage, the magazine includes short stories and poems in Scots and, importantly, in Doric.

The Team at  Pushing Out the Boat is  excited about the upcoming edition, which is the fourteenth since 2000. They take pride in being a home for new writing and art and providing North-East Scotland with a literary and art journal to be proud of.  The voluntary team are honoured to have been gifted use of the image by Tom Hammick for this edition, not least as an acknowledgment of the quality  of the publication.

Of the print, Tom said: “Violetta and Alfredo’s Escape was inspired by a residency I had as artist in residence at ENO. This woodcut came from listening and watching their production of Traviata many times. I wanted to give Violetta a break, and somehow enable her and Alfredo to at least attempt to escape from the cruelty and stringent morals of the bourgeois society that separated them. Here they are in suburban bliss, somewhere I imagine upstream on the Thames!”

The team is extremely proud of the magazine and its place in local society. Its distinctive ‘blind selection’ process for choosing from submissions ensures a lack of favouritism – work is selected on merit alone.  The magazine’s supporters and contributors say that, from its earliest days, it has welcomed a unique blend of artistic approaches and inspirations. Pushing Out the Boat is a tribute to the North East.