Mugs of coffee in hand, I gestured Doc to sit on the single kitchen stool while I stood, bum to radiator, next to the window.   He turned his piercingly blue eyes on me and, after insisting I called him Wil, said, ‘What I still don’t understand is how you got him here or how you…’  But at this precise moment, from somewhere outside came a furious ‘Wrrrr’ followed by the sound of violently exploding wood.  Rapidly craning my neck to look into the yard below, I was just in time to see Walrus hauling himself off the door which now lay off its hinges beneath him, shattered in the snow.   Doc leapt off his stool and joined me at the window as we watched Walrus hook his tusks under the edge of the door and flip it effortlessly over to reveal the half-full sack of mussels beneath it.

‘Oh, shit,’ I yelled, dashing towards the door, ‘we’ll never get him back into the shed or my van in this state.’

I was down the stairs and into the back yard within seconds, Doc not far behind.  Walrus was busy ripping open the bag with his tusks.  Even I didn’t dare approach too closely.  ‘It’s OK mate,’ I said in the calmest voice I could muster, ‘nobody’s going to touch them, they’re all for you.’

Walrus gave me one of his impenetrable looks then went back to his feast.  Doc tapped me on the shoulder, gesturing towards the tenement.  At almost every window a face was watching the cabaret below.  My head was pounding.  Nothing really mattered now except to get Walrus back to sea.  I was at my wit’s end. ‘What the hell do we do now, Wil?’

He looked at me through those sharp eyes of his.  ‘Well, Mike, you managed to get him here, single-handed, and you sure as hell didn’t carry him here in your arms.  Whatever magic you worked then, you need to find it again now.’

‘Thanks a lot.’ I replied sarcastically, turning to study Walrus again.  He’d finished the mussels by now and was licking his lips triumphantly.  He looked magnificent: proud, fierce and indomitable.   I stared at him in mixed admiration and despair.  He turned his eyes on me.  ‘Wrrrr.‘  It was a command this time, no doubt about it.  Home.  The word echoed round my head like a joyous peeling of bells, home, home, home.  I turned to look at Doc, ‘You hear that, Wil?’

‘Never mind,’ I replied, ‘I think he’ll come quietly now.’  I beckoned to Walrus, ‘Come on old chap, let’s get you home.’  Doc stood to the side, his face a picture of scientific incomprehension and awe as Walrus galumphed past him.  At the back door of the tenement, hands on hips stood Ina, grinning broadly.

‘That wis an affa guid show ye pit on there mi loon.  Ye should be on a telly.  Onything, ah can dee tae help?’

‘Just keep the passage clear if you would, Ina, he gets spooked by crowds.’ I could already see some of my neighbours milling in the corridor.  Ina was into traffic-cop mode instantly, waving her hands commandingly.  ‘Awah back, oot the wae, heavy goods comin thro.’  My neighbours retreated reluctantly up the stairs and we were soon out on the snowy front pavement.  As Walrus flopped onto the paving stones, an old lady on the other side of the street gasped in horror, eyes wide open, hand over her mouth.

‘Give us a hand would you, Wil?  I’ve got a ramp in the back of the van.  Walrus knows the drill.’  We hauled the three planks out together and watched Walrus clamber aboard – so different from his laboured efforts the day before.  ‘You’ll give us a hand on the beach, won’t you Wil?’

‘Try and stop me.’ He grinned.

‘I’ll need to turn,’ I said, ‘visibility’s not too good in the van, could you keep an eye out for traffic?’

‘What do you mean turn, the nearest beach is just up the road, beyond the Lab, just beyond the Battery.  You weren’t thinking of going back to the Don were you?’

I slapped my forehead, ‘Durrr, why didn’t I think of that?  Yep, there’s a nice little beach just inside the last breakwater, isn’t there?’

Minutes later, I pulled into the side of the road just above the broad winding path down to the beach.  The wind was still blowing out of the North, shivering the gorse bushes at the top of the brae.  The landscape was locked under snow, gulls surfed the wind or hung in mid air above the estuary and one of the Shetland ferries, with its dramatic Viking logo, was nosing out into the swell.

Walrus was already up on his front flippers, facing out of the back of the van, sniffing the air as Doc and I opened the back doors.  ‘Oh, shit,’ I said, ‘There’s a kissing gate across the path, how the hell are we going to get him though there?’  Doc scratched his beard, ‘Think he might just fit under the barrier if we’re lucky.  Looks like there’s about two foot of clearance.’

‘Wrrrr,’ said Walrus, flippers already over the threshold, eyes peering impatiently down at the snowy verge below the back of the van, as if contemplating leaping.

‘Whoa, hold your horses, matey,’ I shouted.  ‘Wait for the ramp.’  Doc was already hauling out the second plank, while I pulled out the third and slid it into place.  Walrus was down the ramp like a rocket, almost knocking over the Doc in passing.  He needed no instructions, pushing open the kissing gate then sliding like a fat limbo dancer under the metal horizontal to its side.  Once on the path beyond, there was no stopping him.   He slid over the broad, wooden steps with a kind of heavy, fluid grace.  Flopping onto the beach he made straight for the water.

Half-submerged, he turned to look at us.  He placed a single flipper over his chest.  ‘Wrrrr’, he said, bowing his head slightly, before disappearing under the waves.  We saw his mighty head reappear from time to time, watched by a family of surprised harbour seals.  He turned one last time.

‘Go North, old friend.’  I shouted, but he needed no bidding from me.  ‘Send us a post card when you get home.’  Doc was shaking his head in disbelief.

Back in my car, he fixed me in a long poker-faced stare before breaking into a mischievous grin. ‘You’re going to need a carpenter to fix that shed door of yours and you’ve a lot of explaining to do!’ 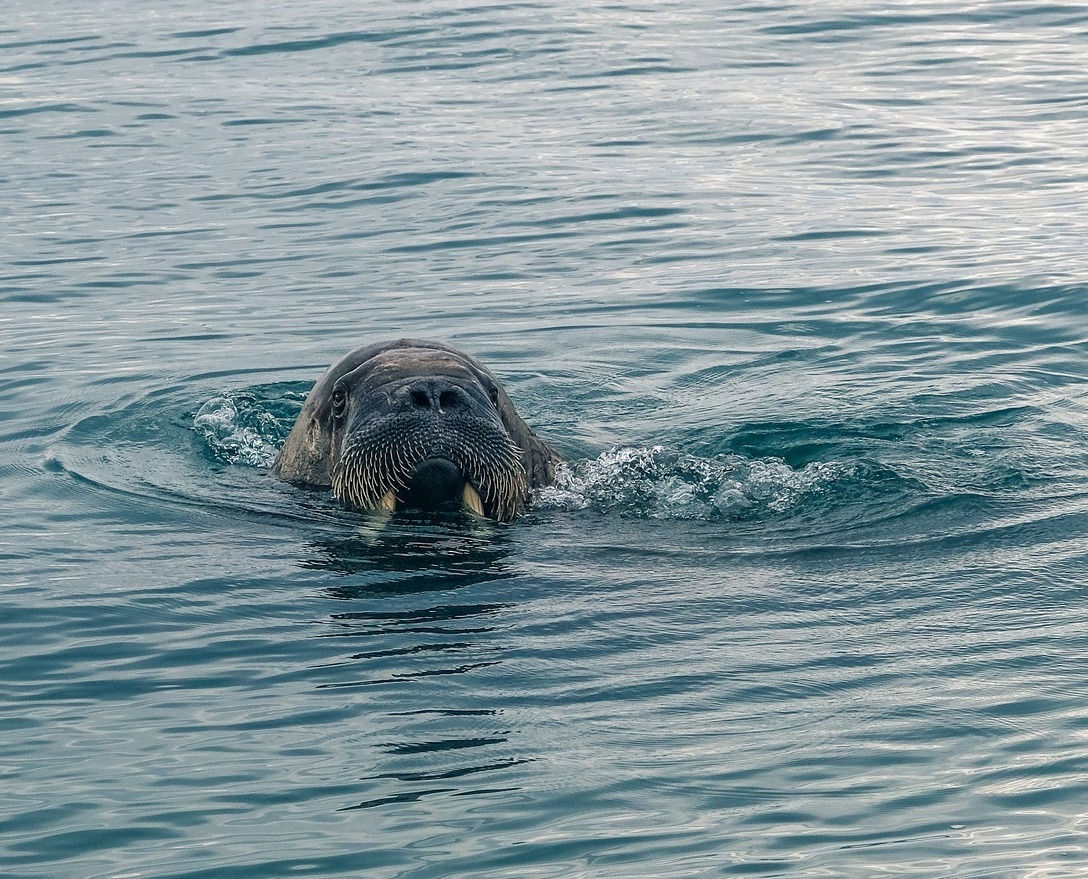 Donate to our crowdfunding project

We hoped you enjoyed this little story. Please help us to support the publication of other stories, poems and artwork by contributing to our crowdfunder.