Published by Pushing Out the Boat, 2015

Issue 13 of Pushing Out the Boat, North-East Scotland’s Magazine of New Writing, was launched on Sunday 26 April 2015 at the Phoenix Hall, Newton Dee, Aberdeen. 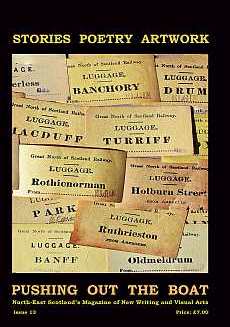 Literary and arts magazines are special. They’re important, and necessary. Nothing else provides the opportunity for a writer or artist to be published as an individual but in collective form, part of a singular, ambitious endeavour. Nowhere else does the new artist appear in democratic proximity to the well-known veteran. In no other publication is each offered the same small, concentrated space in which to make a mark. Both mirror and reflection, the pages of the literary magazine are where the artist and writer can be bold or restrained, loud or quietly measured, where the reader can follow a career from first published work to literary or artistic stardom. They are, at the same time, destination and launch pad.A love of the literary magazine was one I acquired young. I used to watch my parents avidly reading their separate magazines, my mother’s austere in plain cover with the sailing ship motif, my father’s arriving by post from America, bearing the now-lost glamour of distance. Now, in spite of being able to read them online, I’m still among those who keep their journals, pile them in cupboards, unable to break the habit of delighting in the written word or image, on paper.For the reader, or perhaps more correctly the devotée, waiting is part of the experience. We enjoy the anticipation. Happily, we wait for a week, a month, a year for the next edition of our chosen magazine because we know it may be the one to hold that particular poem, that story or image, that dazzling short piece of writing which will stay alight in our memory for decades.

Literary magazines gain stature through longevity. Pushing the Boat Out was established in 2000 and now, this 13th edition demonstrates brilliantly how and why. It has expanded its horizons while maintaining the tone and savour of place which has always made it unique. Through the words and images of this edition, we experience established and distinguished voices side by side with new, bold, exciting ones. Through different forms and words, they are all contributing superbly to this most important of human endeavours – portraying and reflecting with profound thought and beauty, the lives we lead.

Esther Woolfson’s account of sharing a home with birds, the acclaimed Corvus – A Life With Birds, was published in 2008, as was her novel Piano Angel. She has won prizes for both fiction and non-fiction and was shortlisted in 2014 for the Ondaatje Prize. An anthology Cold Vision, inspired by her residency and those of Kathleen Jamie and Paul Farley, in Kielder as part of the 2012 Hexham Book Festival, was published in 2014. A former Artist in Residence at the Aberdeen University Centre for Environmental Sustainability, Esther was recently appointed Honorary Research Fellow in the Department of Anthropology at Aberdeen University.

‘The Excuse Hound’
extract from story by Ken Morlich

‘The Window Seat’
extract from story by Naziah Nawroj (Age 15)

The stories by can be read in full in Issue 13